Motherwell sits in the heart of central Scotland and can chart its history as far back as Roman Times.

However, it is as the heart and soul of the Scottish steel industry that it is best known. Designated “Steelopolis” – the town of Steel, Motherwell was home to numerous companies linked directly and indirectly to the steel industry, many supplying high quality goods and services worldwide.

Motherwell began its life as a small textile hamlet, but it was not until the area’s rich natural resources of coal and iron ore were mined, along with the arrival of the railway in the 1830s (opening links to Glasgow and Edinburgh) that it began to grow into the town it is today.

By the turn of the 20th century more than 62% of Motherwell’s workforce was employed either in the railway services, coal industry or the iron and steel industry, with more than half this figure dedicated solely to iron and steel.

Not only steel in work but steel in play: it is testament to the importance the steel industry played in Motherwell’s history that its local football team should be nicknamed “The Steelmen”. 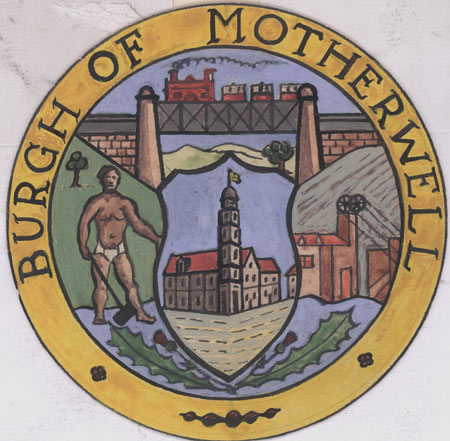 The images within this seal clearly show the important elements that represent the Burgh of Motherwell.

A central shield bears an image of Motherwell Town Hall, to the right of this a coal pithead, to the left a depiction of Vulcan, the god of fire and metalworking. A thistle, the national symbol of Scotland, lies beneath the shield.