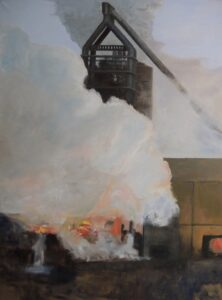 The Craig and Beyond

North Lanarkshire’s Arts is delighted to host an exhibition by Roger McNulty, which is concerned primarily with Steelmaking; including its dramatic processes, the transient and global nature of its production, and the scientific research into utilising its waste product ‘slag’ to assist in the battle against global warming.  The work in the exhibition uses paint, metallic powders and metal on canvas to express the physicality of the materials, the labour involved, the concentration required and the dramatic nature and urgency of the activity.

Roger McNulty’s practice incorporates a range of different media including painting, video and sculpture.  Now living and working in Essex, this particular exhibition is painting based and derives from his early life in Craigneuk, North Lanarkshire, and his subsequent employment with the British Steel Corporation.

“Having lived in the shadow of the Craig and its dramatic effects on the verge of the fertile Clyde Valley, provides a constant source of vivid memories’’.

Roger has a BA in fine Art from Central Saint Martins, University of the Arts London. He has worked and exhibited widely in the UK and Asia.

For sales and/or other enquiries please contact the Arts Development Office on 01236 856228.