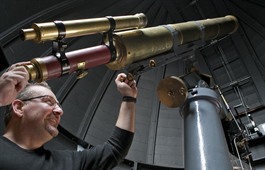 It’s not just our Observatory that’s historic – our telescope is too. Here is a snapshot of the history of both.

1896 Following the donation of a telescope to Airdrie Library, which was then in Anderson Street, an Observatory was created inside the library.

1910 James Lewis, formerly a Ballie on Airdrie Burgh, became the longest standing curator in 1910. He served until 1945.

1925 The library and Observatory moved to the current location in Wellwynd. The current Observatory telescope was purchased at this time.

1977 Glasgow-based spaceflight and astronomy society ASTRA (Association in Scotland to Research into Astronautics) took over the running of the Observatory and served until 2009.

2009/10 The Observatory got a new dome and the telescope was refurbished and adapted to take modern, metric-sized eyepieces. Students of Glasgow Metropolitan College painted the space mural on the staircase. The Airdrie branch of ASTRA decided to become an independent organisation and the Airdrie Astronomical Association was formed and took over the curatorship.

2010/12 The Observatory was visited by three Apollo astronauts, including the 10th man to walk on the moon, Brigadier General Charlie Duke, Lunar Module Pilot of Apollo 16.

Keeping Safe in Our Libraries