Iron making has been a process used in Britain for almost 3,000 years. Dating back to 800 BC, the beginning of the Iron Age, many relics and remains from this period can still be found within some parts of North Lanarkshire.

The sole purpose of producing ‘pig iron’ at Ravenscraig was to provide the necessary ‘hot metal’ required to make steel. The iron was produced in blast furnaces. Ravenscraig ultimately had three blast furnaces, two of which were in use at any given time, the third being either on stand-by or undergoing a relining of its internal brick work.

Furnace numbers 1 and 3 were the first bell-less top charging systems of their kind to be installed in a UK steelworks.

Iron Making is a continuous process, and the blast furnaces would be kept fired for up to two years before being refurbished. The raw materials of coke, sinter and iron ore were fed into the top of the furnace, and blasts of hot air were pumped from the bottom, heating the coke sufficiently to melt the iron content.

When making sinter, a by-product of red dust would float into the atmosphere; as every frustrated housewife within the vicinity could attest to, it had the ability to cover everything it came into contact with.

“Each section in a vast steel works was its own little world, its own odd rules, customs and habits. One I recall at a meeting was ” My faither done it that way and his faither as weel so that’s how we dae it”. In response to one of many management bids to improve efficiency! It concerned adding additives to the furnaces. Rather than shovel additives in they were to be weighed after the lab had sent down the precise quantities and added with a mechanical ladle/charger! But no, the guys had always done it “that way” and always got it right.” 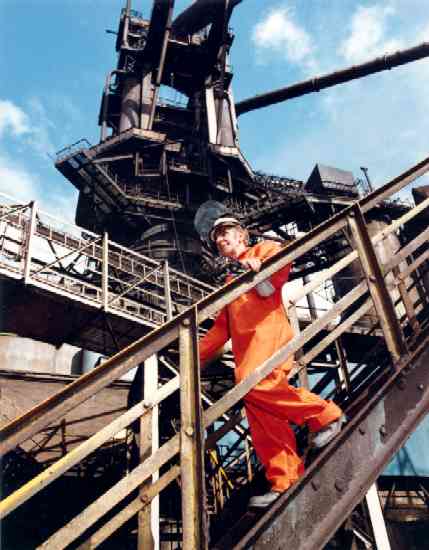