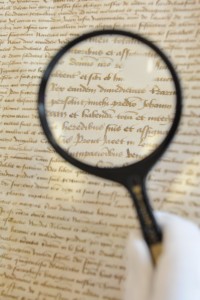 Every month we will feature one of our collections.

This month’s featured collection are the records of the Papers of the Carrick-Buchanan family, Drumpellier Estate (Collection Reference U1).

The Drumpellier Estate was purchased from the Colquhouns of Langloan by Andrew Buchanan (1690-1759), Provost of Glasgow, in 1740. Apart from the years 1777 – 1809, when the Estate was the property of Andrew Stirling (a cousin), Drumpellier has remained the property of the Buchanan family ever since. The family name was changed to Carrick Buchanan on the Entail of Robert Carrick, the Glasgow Banker, who left the Buchanans large tracts of land in New Monkland and Shotts Parishes. Prior to this date the Drumpellier Estate comprised lands mostly in Old Monkland Parish. The Estate prospered under David Buchanan’s son Robert Carrick Buchanan (1797-1844). The family also held property abroad including Virginia, USA.

By the late nineteenth century, under Robert’s son, Sir David Carrick Robert Carrick Buchanan (1825-1904), the estate also included the lands of Mount Vernon in Old Monkland and Barony parishes; Corsewall, by Stranraer, Dumfries and Galloway (another part of the Carrick Entail); Carradale in Argyll & Bute; and lands throughout the former County of Lanark. The family sold the estate in 1919 and the house was demolished in the 1960s. Part of the Drumpellier Estate is now a country park.

The archive was created at Drumpellier, and remained there after the family had left around 1920. Drumpellier House itself was demolished in the 1960s, and the papers were moved into a shed on the nearby Drumpellier Golf Course. These were only re-discovered after a fire in the late 1980s, and were then transferred to Coatbridge Library under Monklands District Libraries. There are also a small collection of artefacts and papers (listed under U1 40) originating from Drumpellier Estate Papers which had previously been donated to Coatbridge Burgh / Monklands District Council library departments.

Robin Marwick began documenting his lifelong love affair for his football club by keeping handwritten records of all things Albion Rovers in his notepads and scrapbooks. He formed a collection of items which spans the entire history of Albion Rovers to date and also includes; photographs, newspaper cuttings, club documents, match programmes and even telegrams.

The collection not only showcases Robin’s passion for the history of Albion Rovers but also provides a fascinating insight into Scottish football and the wider social history surrounding it.

Robin Marwick (1936-2015) was known to many as the club historian of Albion Rovers and wrote two books about the club, ‘The Boys from The Brig; The Life and Times of Albion Rovers’’ and ‘Champion Albion’.

Have a look out our Flickr page to see a selection of digitised highlights from the collection.

You can access the original items in this collection at North Lanarkshire Archives in Motherwell, collection reference number U194.