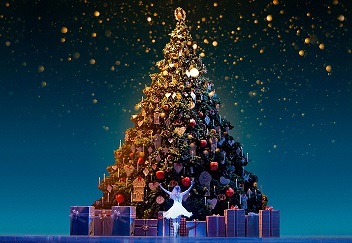 Live via satellite to Airdrie Town Hall cinema. The Royal Ballet’s glorious production of The Nutcracker, created by Peter Wright in 1984, is the production par excellence of an all-time ballet favourite. It is Christmas Eve and Herr Drosselmeyer the magician sweeps young Clara away on a fantasy adventure in which time is suspended, the family living-room becomes a great battlefield, and a magical journey takes them through the Land of Snow to the Kingdom of Sweets. Tchaikovsky’s glittering score, the gorgeous festive stage designs, and The Royal Ballet’s captivating dancing including an exquisite pas de deux between the Sugar Plum Fairy and her Prince, make this Nutcracker the quintessential Christmas experience. This performance was originally recorded in 2016, and is being broadcast live via satellite for one night only.
Approximate running time: 2 hours 15 minutes.